UAVSAR pod under the Gulfstream-III (G-III) aircraft (left) and the modular design of the pod electronics bay, which enables us to adapt the radar to operate in different frequencies with ease.
The AirMOSS radar will be a modification of the L-band radar in NASA's Uninhabited Aerial Vehicle Synthetic Aperture Radar (UAVSAR) program.

AirMOSS utilizes a passive dual-polarized array antenna based on the GeoSAR P-band antenna design to take advantage of the good polarization isolation over the bandwidth of 280 to 440 MHz.

P-band antenna mounted in the pod
The radar utilizes the L-band RF electronics and an arbitrary waveform generator (AWG) from UAVSAR. The L-band transmit pulse is down-converted to P-band by mixing it with a tone from a direct digital synthesizer (DDS). The P-band transmit pulse is then amplified and sent to either the horizontal (H) or the vertical (V) polarization channel of the passive antenna. The transmit bandwidth is determined by the AWG and the selection of one of four filters (6, 20, 40, or 80 MHz) in a filter bank.

The radar has two identical receive chains. Both the H and the V radar returns are up-converted to L-band by mixing them with the same tone from the DDS as was used on transmit. The radar return is filtered using an identical filter bank as on transmit and then enters the UAVSAR receive electronics.

Each of the AirMOSS study areas is collocated with a FLUXNET meteorological tower, which also includes instrumentation to measure root-zone soil moisture (RZSM) within the tower footprint (~1 km). 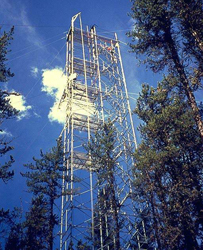 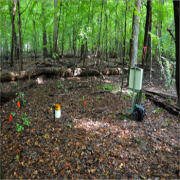 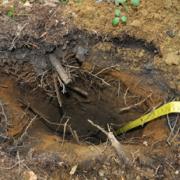 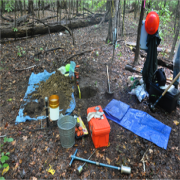 The ground sensors measurements will be archived as the L2-IGSM and L2-Precip products.

The Airborne Laboratory for Atmospheric Research (ALAR) platform is a light twin engine aircraft, a Beechcraft Duchess, instrumented with a GPS/INS attitude system, and a turbulence probe (BAT probe) mounted on the nose. This system enables 50Hz 3D winds, enabling its use for airborne flux measurements. The wind system has been wind-tunnel calibrated (Garman et al., 2006). The vertical wind uncertainty is +/-6cm/s. The aicraft has an all-Teflon fast sampling system to enable eddy covariance flux measurements, and fast response CO2 instrumentation. We often fly with a spectral radiometer for surface reflectance measurements. The aircraft also has a cloud water collector. 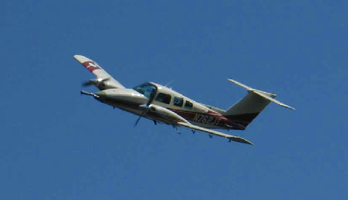 Duchess in-flight at PROPHER, Pellston, MI
For AirMOSS, the ALAR platform is being augmented with a Picarro Wavelength-Scanned Cavity Ring Down Spectrometer (WS-CRDS), a greenhouse gas analyzer that will measure spatial variations in atmospheric CO2, CH4 and H2O over selected study areas. This data will be used to validate the model simulations and the upscaling process of NEE from the flux-tower to the modeling grid cell.

Data from ALAR will be archived as the L2-CFlux product.